Its raining awards for ‘Feel the Punch’.


The students of ‘Dilsukhnagar Arena’ have once again brought laurels to the academy by bagging the ‘best animation film award’ at the 2nd edition of the Hyderabad Short Film Festival (HSFF) 2011.

“Feel the Punch” is a hilarious 3D animation short film in which a beggar outsmarts a bystander. The climax especially leaves the audience in splits and is an indirect satirical reflection on the evolution of technology. Apart from the fact that it has bagged eight awards at reputed film festivals around the globe( excluding HSFF), “Feel the Punch” has another distinction  : it is the only animation short film on you tube with nearly nine and a half lakh hits to its credit.

The 2nd edition of the Hyderabad Short Film Festival was a grand affair with a good turnout of fans and aspiring filmmakers. Prominent Tollywood personalities graced the occasion and spent some quality time with the budding filmmakers. In short, the festival which was held on the 17th and 18th of March at Prasad Labs in Jubilee Hills, Hyderabad was a memorable occasion.

Mr. Relangi Narasimha Rao, famous film director of Tollywood, gave away the award for “Feel the Punch” to Mr. Rajasekhar Buggaveeti, the MD and CEO of ‘Dilsukhnagar Arena’.

Yet another award only goes to emphasize the quality of the training at ‘Dilsukhnagar Arena’ and stands testimony to their expertise in the field of Animation. 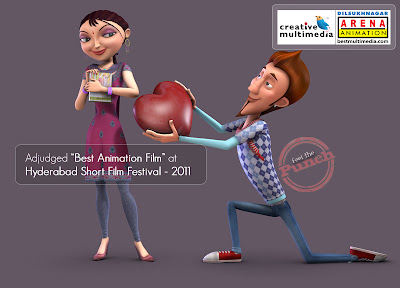 Posted by Dilsukhnagar Arena at 6:48 PM