Hamburg raises a toast to "Feel the punch" 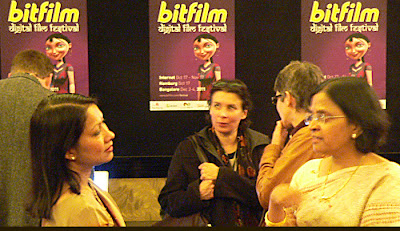 It is a matter of great pride for all of us at Dilsukhnagar Arena that the enchanting 3D character ‘Mona’ in our immensely popular and successful Student Short Film ‘Feel the punch’ was featured prominently as a poster at the inaugural of the Bitfilm-12 festival in Germany. Amidst a starry array of entries from across the world, it is indeed a great honour and a tribute to our training standards that our film/character was chosen for the official poster at the launch venue. It may be recalled that ‘Feel the punch’ has already won a coveted nomination at this prestigious international film festival along with our other student short film ‘Hugo Vs Lino’.

Bitfilm's opening event took place in Hamburg, Germany's media capital and Bitfilm's hometown on Monday, the 17th of October, 2011. Ms. M. Subashini, Consule General of India in Hamburg lit the "lamp of the festival" to commence the celebrations. The opening program featured highlights from the three competitions.
Posted by Dilsukhnagar Arena at 3:07 PM