'Feel the punch' adds feather no.4 to its decorated awards cap

'Feel the punch' cornered all the glory at the 7th edition of MAAC’s Annual 24 FPS Animation awards celebrations as it outshone competition to claim the Best 3D Animated Short Film award in the student team (open) category. Three prestigious recognitions at prominent Animation film festivals so far and ‘Feel the punch’ is showing no signs of fatigue.

The film is the proud recipient of

Going by the overwhelming response for ‘Feel the punch’ at all the film festivals it has participated in so far, the film looks like it’s well on course to creating a shatter-proof record as it races ahead to the top honours at many more national and international film festivals in the near future.

The film was ideated and animated by a team of 25 students at Dilsukhnagar Arena in just 70 days. The budding team of animators crafted the film in a real-time production environment as part of their intensive internship program.

'Feel the punch' is creating waves on the internet as its video hosted on YouTube has registered a staggering 2,50,000 clicks in a very short time and is all set to create a record for any short film in its category. The film has been screened specially for select audiences and also at various film festivals. No screening has ended without the audience bursting into thunderous applause and demanding an encore.

It latest recognition at the 24 FPS Animation awards comes as no surprise. The 7th Annual 24 FPS Animation awards were held at the SRPF Grounds in Goregaon, Mumbai on November 19, 2010. The Awards showcased the best animation & VFX work in Hollywood , Bollywood, gaming and commercials. The prestigious event had nominations not only from young Animators and studios in India but also from countries like China, France, Germany and the US.

The jury was drawn from studios like DreamWorks, Lucas film, Rhythm & Hues, Prime Focus, Prana, Pixion, Crest Animation, Maya Digital Media, and more and the awards were given away in over 20 categories covering Gaming, TV, VFX and Advertising. 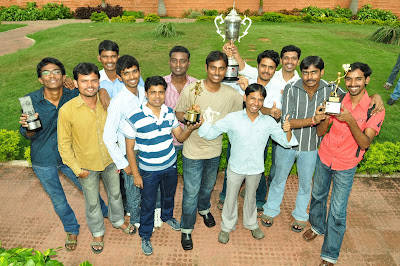 Posted by Dilsukhnagar Arena at 12:40 AM